I was in my room late tonight when I heard some loud sounds–I could hear several voices counting from down the hall even from within my room a significant distance away , and I feared the worst. What were they counting? Shots? Was it some horror countdown to the performance of some stupid act? Could it be that this would be my first of the infamous Copeland parties I would encounter?  So I sauntered nervously into the lounge of B wing. The lights were low, and I couldn’t quite see the people in the room…

….Because they were behind a wall of hanging streamers. About 12 people were sitting in this beautifully decorated common room playing, “pin the condom on the pig” in honor of a girl’s 18th birthday. They had brownies, and nice music. They immediately asked me if I wanted to play, spun me around 20 times (one for each year of my life), and cheered in amazement when I slapped that condom right on the donkey’s rump. Here I am, a senior and an RA, and I was the one feeling welcomed by a bunch of students who had arrived only a few days earlier.

When I asked the girl how her birthday went, she said she was surprised that it had been awesome, because she hadn’t expected to know people (it had only been three days since everyone had arrived, after all).

Community, man–never looks the way you think it will. 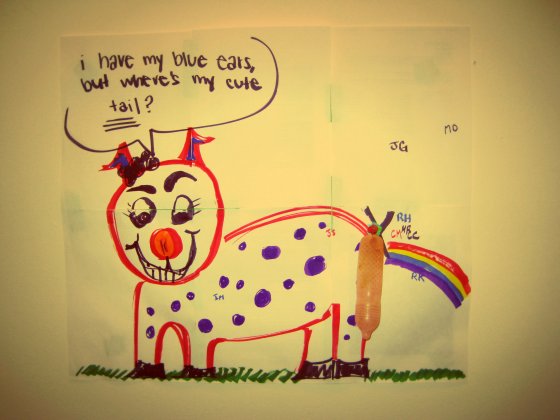